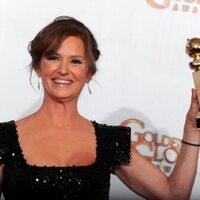 Melissa Leo Net Worth: Melissa Leo is an American actress who has a net worth of $9 million dollars. Born in New York City in 1960, Melissa Leo grew up in Manhattan and made her acting debut in soap opera "All My Children" in 1984. Leo's first part earned her a Daytime Emmy Award nomination for Outstanding Ingenue/Woman in a Drama Series. She picked up several parts in different movies, including "Streetwalkin", "A Time of Destiny" and "Last Summer in the Hamptons". In 1993, she was cast as Detective Sergeant Kay Howard in "Homicide: Life on the Street", appearing in 77 episodes over five seasons. In 1997, she scored a part alongside Sean Penn and Naomi Watts in "21 Grams", winning a Phoenix Film Critics Society award for Best Ensemble Acting. She scored her first Best Actress Oscar nomination for her role in the critically acclaimed film "Frozen River" and won her first Academy Award for 2010's "The Fighter" for Best Supporting Actress. Other TV and film credits include "American Gun", "The Space Between", "Flight", "Olympus Has Fallen", "Lullaby", "Prisoners", "Oblivion", "Veronica Mars", "Criminal Minds", "Mildred Pierce", "Treme", and "Cold Case". Leo lives in New York and has one son, John, with former partner John Heard.