Mel Blanc Net Worth: Mel Blanc was an American voice actor and comedian who had a net worth equal to $25 million at the time of his death after adjusting for inflation. During a 60+ year career, Mel became one of the most-famous voice actors in history. He is arguably the most most prolific voice actor in entertainment history.

He was born Melvin Jerome Blank on May 30, 1908 in San Francisco, California. Even though he started his career in radio commercials, Mel Blanc is best remembered for his work with Warner Bros. Having joined the studio in 1937, he voiced a wide variety of the Looney Tunes and Merrie Melodies characters, including Bugs Bunny, Daffy Duck, Porky Pig, Tweety Bird, Sylvester the Cat, Marvin the Martian, Speedy Gonzales and the Tasmanian Devil, among many others.

Later he lent his voice for Hanna-Barbera's television productions, most notably as the voices of Barney Rubble in The Flintstones and Mr. Spacely in The Jetsons. What's more, he became a regular performer on The Jack Benny Program, in both its radio and television formats. Being one of the most influential people in the voice acting industry, he has rightfully earned the nickname "The Man of a Thousand Voices". Even though rarely seen by his widespread audience, Mel Blanc would be forever remembered as supremely talented voice artist and comic actor who gained immortality with his voice-over work for Warner Bros during the "Golden age of American animation". Mel Blanc died on July 10, 1989. 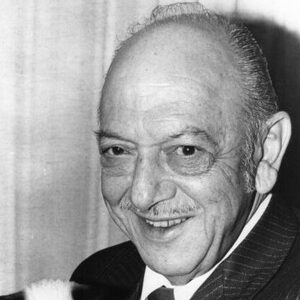