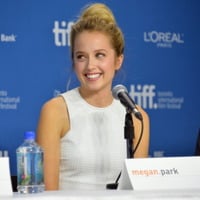 Megan Park Net Worth: Megan Park is a Canadian musician and actress who has a net worth of $1 million. Born in Lindsay, Ontario, Canada, in 1986, Megan Park started her acting career as a child with a handful of small roles. Her early roles include "Ace Lightning", "This Time Around", and "The Blobheads". In 2006, Park landed her first big role, playing Zoe in an episode of "Angela's Eyes". From there, she appeared in "The Dark Room" and "Life with Derek" before scoring the part of Grace Bowman on the hit ABC Family drama series "The Secret Life of the American Teenager" in 2008. Park played Bowman as a series regular until 2013. She also appeared on "Entourage", "Happy Endings", "The Newsroom", and "The Neighbors". Park's film debut came in 2004's "Some Things That Stay" as Brenda Murphy. She has since appeared in "KAW", "Charlie Bartlett", "Diary of the Dead", "The Butcher's Daughter", "A Cinderella Story: Once Upon A Song", "So Undercover", and "The F Word". Park also played in the band Frank and Derol with Codi Caraco and Miley Cyrus' half-sister, Brandi. She quit the band in 2010 to keep focused on her acting career. Park has been dating musician and actor Tyler Hilton since 2006 after they met on the set of "Charlie Bartlett". They're now engaged.