Megan Hilty Net Worth: Megan Hilty is an American actress and singer who has a net worth of $2 million. Born in 1981 in Bellevue, Washington, Megan Hilty grew up hoping to pursue a singing career in opera. She studied at the Carnegie Mellon School of Drama, earning her degree in 2004.

While finishing up her education, Hilty tried out for a hit in the Broadway musical "Wicked" and earned a part as Glinda's standby. She made her Broadway debut in the part before she landed the lead role in the spring of 2005. Hilty starred in the musical for a year before making her on-screen debut in a 2007 episode of "The Suite Life of Zack & Cody". She lent her voice to Snow White as a singer for "Shrek the Third" the same year. Hilty's TV credits include small parts in "The Closer", "Ugly Betty", "Shark", "CSI: Crime Scene Investigation", "Desperate Housewives", "Eli Stone", "Glenn Martin, DDS", "Bones", "Louie", "Melissa & Joey", and "The Penguins of Madagascar". In 2012, Hilty landed a lead role on "Smash" as Ivy Lynn. She also began voicing the main character of JD on "Robot and Monster" and appearing as a series regular on "Sean Saves the World" as Liz. Hilty returned to Broadway in the 2009 production of "9 to 5: The Musical" as Doralee Rhodes at the Marquis Theatre. She was nominated for a handful of honors for the part, including a Drama Desk Award for Outstanding Actress in a Musical. Hilty has been married to her husband Brian Gallagher since 2013. They are expecting their first child together in late 2014. 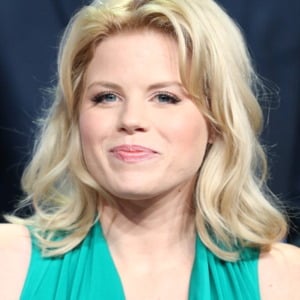