Maurice Chevalier Net Worth: Maurice Chevalier was a French actor and singer who had a net worth of $10 million. Born in Paris, France, in 1888, Maurice Chevalier got his start in the entertainment industry in the early 1900s after bouncing around from job to job. He first began singing at a local café and earned a part in a community musical, appearing in "l'Alcazar".

In less than a decade, he teamed up with France's darling, Frehel, forming one of the biggest duos in the entire country. The partnership only lasted for two years, however, as Frehel succumbed to issues stemming from substance addiction. Chevalier's career was interrupted by his service during World War I; he was injured by shrapnel on the battlefield and was held by the Germans as a prisoner of war. Chevalier was only released thanks to the work of Spain's King Alfonso XIII. A year later, he returned to performing and took to entertaining the troops. Chevalier soon moved to London, then returned to Paris, working in film and music. In 1928, he made his Hollywood debut, agreeing to a contract with Paramount Pictures and appearing in "Innocents of Paris". Two years later, Chevalier was nominated for his first Oscar, earning the Best Actor nod for "The Love Parade" and again for "The Big Pond". He became one of the most recognizable stars in the U.S. during the early '30s, appearing in several hit films, including "Playboy of Paris", "Love Me Tonight", and "The Beloved Vagabond". He also starred in 1958's "Gigi". Chevalier maintained his career during World War II and was invited to perform by the Nazis, though he declined. Instead, Chevalier performed at his former prison camp for World War II POWs. He was responsible for dozens of hit songs, such as 1946's "Ma Pomme", 1930's "Living In the Sunlight, Loving in the Moonlight", 1957's "Thank Heaven For Little Girls", and 1967's "Enjoy It!".

In 1970, Chevalier sang the leading song for Disney's "The Aristocats". He died two years later on New Year's Day in 1972 in Paris. Chevalier was 83 years old. 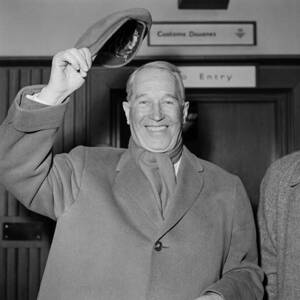