Kourtney Kardashian rose to fame appearing on the reality show, "Keeping Up with the Kardashians", as well its subsequent spin-offs, "Kourtney and Khloe Take Miami", Kourtney and Kim Take New York", and "Khloe and Lamar. The two-year-old is already well known to audiences around the world due to his numerous television appearances and travels extensively with his parents. His extended family is also famous. His step-grandfather is former Olympic champion Bruce Jenner (Caitlyn Jenner), and his grandmother, aunts, uncles, and step-aunts and uncles, including Kim Kardashian, Kylie Jenner, and Kendall Jenner, are all models, actors, producers, or reality show stars. His family made headlines when he became the big brother to a new baby sister Penelope Scotland Disick in July of 2012. Mason Dash Disick has appeared in the reality TV series Kourtney & Kim Take New York from 2011 to 2012, Kourtney & Kim Take Miami from 2010 to 2013, and Keeping Up with the Kardashians from 2010 to 2016. His younger brother Reign Aston Disick was born in December of 2014. 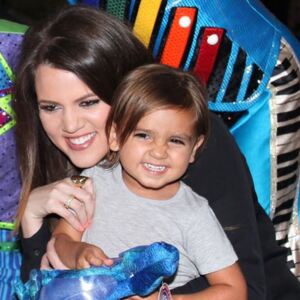