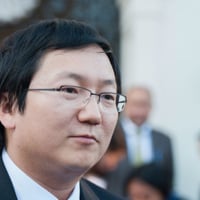 Masi Oka Net Worth: Masi Oka is a Japanese-American actor and digital effects artist who has a net worth of $5 million dollars. Masayori Oka was born in Tokyo, Japan in December 1974. He is best known for his role as Hiro Nakamura in the TV series Heroes. At six years old he and his mother moved to Los Angeles, California. When he was eight he appeared on the CBS game show Child's Play. He made the cover of Time magazine at 12 years old in 1987. Oka worked as a translator at the 1992 Summer Olympics. He graduated from Brown University in 1997. After graduating he worked at George Lucas' Industrial Light & Magic. His first television appearance came in 2001 on Dharma & Greg. In 2002 he made his film debut in Austin Powers in Goldmember. In 2003 Oka starred as Deng Wu in the TV series Luis. From 2002 to 2004 he played Franklyn in the series Scrubs. His best known role came from 2006 to 2010 as Hiro Nakamura in the TV series Heroes. Since 2010 Oka has played Dr. Max Bergman in the series Hawaii Five-0. He has starred in the movies Along Came Polly, Get Smart, Friends with Benefits, and Jobs. He has won a Saturn Award and a TV Land Award and been nominated for a Golden Globe and a Primetime Emmy Award.