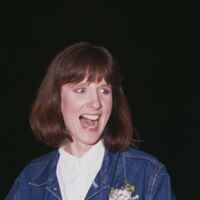 Mary Gross net worth: Mary Gross is an American voice actress, comedian, and actress who has a net worth of $3 million. Mary Gross was born in Chicago, Illinois in March 1953. From 1981 to 1985 she was a cast member on the television series Saturday Night Live. Gross starred as Abigail MacIntyre on the TV series The People Next Door in 1989 and as Phoebe Trillman on the series Billy in 1992. From 1997 to 2000 she starred as Mrs. Quick on the television series Sabrina, the Teenage Witch. Mary Gross has had recurring roles on other TV series including Boston Legal and General Hospital. She has appeared in many films including Club Paradise, Baby Boom, The Couch Trip, Big Business, Hot to Trot, Feds, Troop Beverly Hills, There Goes the Neighborhood, The Santa Clause, Practical Magic, A Mighty Wind, and more. Gross was nominated for a Primetime Emmy Award for Outstanding Writing in a Variety or Music Program in 1984 for Saturday Night Live. Mary's brother is "Family Ties" star Michael Gross.