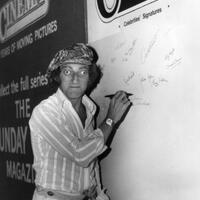 Marty Feldman Net Worth: Marty Feldman was an English comedy writer, actor, and comedian who had a net worth of $5 million. Marty Feldman was born in London, England in July 1934 and passed away in December 1982. He was known for his crooked and bulbous eyes. His eyes looked like that as a result of a botched operator for Graves' disease. Feldman became a part of the comedy act Morris, Marty and Mitch and appeared on the BBC series Showcase in 1955. As an actor Feldman starred in the TV series At Last the 1948 Show in 1967. From 1968 to 1969 he starred in the TV series Marty. He also starred in the films The Bed Sitting Room, Every Home Should Have One, Young Frankenstein, The Adventure of Sherlock Holmes' Smarter Brother, Closed Up-Tight, Sex with a Smile, Silent Movie, The Last Remake of Beau Geste, In God We Tru$t, Slapstick (Of Another Kind), and Yellowbeard. Feldman was a writer for the TV series Educating Archie, The Army Game, Bootsie and Snudge, The Walrus and the Carpenter, Barney is My Darling, At Last the 1948 Show, Marty, Comedy Playhouse, The Marty Feldman Comedy Machine, and Marty Back Together Again. Feldman won two BAFTA Awards for Best Light Entertainment Performance and Best Writer for Marty in 1969. He was nominated for a Golden Globe Award for Best Motion Picture Actor in a Supporting Role for Silent Movie in 1977. He also took home a Saturn Award for Best Actor for Young Frankenstein in 1975 and an Academy of Science Fiction, Fantasy & Horror Films Award for the same role. Marty Feldman passed away on December 2, 1982 at the age of 48 from a heart attack.