J. R. Martinez Net Worth: J. R. Martinez was an American motivational speaker, actor and former U.S. Army soldier who had a net worth of $1.2 million. J. R. Martinez was born June 14, 1983 in Shreveport, Louisiana. In 2003, Martinez sustained severe burns to over 34 percent of his body while serving as an Army infantryman in Iraq.

Since his recovery, he has traveled around the country speaking about his experiences to corporations, veterans groups, schools and other organizations. In 2008, he played the role of Brot Monroe on the ABC daytime drama All My Children. He was the winner of Season 13 of ABC's Dancing with the Stars. Martinez' win on Dancing with the Stars also marked the first win for his partner, Karina Smirnoff. He credits her with pushing him to excel in routine after routine, leading them to win the competition. Martinez also served as the Grand Marshal of the 2012 Rose Parade. He is currently costarring on the syndicated action series SAF3. Martinez first began providing support to fellow burn survivors while being treated for his own burn injuries at Brooke Army Medical Center. He has gone on to serve as a member of the Board of Directors of The Phoenix Society for Burn Survivors and become active in Operation Finally Home, an organization that builds housing for American veterans and their families so they may live mortgage-free. Martinez also became a motivational speaker and in 2008 was honored as a "Shining Star of Perseverance" by the WillReturn Council of Assurant Employee Benefits. The following year, the nonprofit Iraq and Afghanistan Veterans of America (IAVA) presented him with the Veterans Leadership Award. 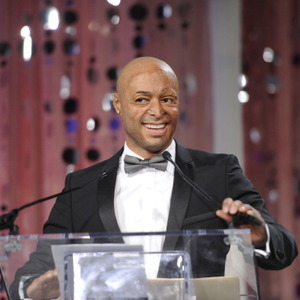