Martin Clunes Net Worth: Martin Clunes is an English actor who has a net worth of $15 million dollars. Being active in the entertainment industry, he is best known for his role as Martin Ellingham in the television series Doc Martin. Born Alexander Martin Clunes in Wimbledon, London, England on November 28, 1961, he attended Royal Russell School as well as The Arts Educational Schools in Chiswick, London.

Clunes is the son of Alec and Daphne Clunes, both of whom were actively involved in the arts. His father was a classic actor who died of lung cancer, and his mother worked for the London Academy of Music and Dramatic Art. He made his television debut on Doctor Who in 1980, but he later switched to modeling for Gilbert and George. Clunes' first consistent television role was on BBC's No Place Like Home, after which he was seen in such shows as Saving Grace, Jeeves and Wooster, Hunting Venus, The Booze Cruise, Shakespeare in Love, Baldi, A is for Acid, Goodbye Mr. Chips, Doc Martin. Also, he lent his voice in the children's show Kipper the Dog. Aside from his engagement in entertainment, Clunes has made many charitable donations and efforts towards the Terrence Higgins Trust, the Born Free Foundation, and has done work for the Comic Relief Charity for Survival International and African Initiatives. He received the award for Top TV Comedy Actor as well as Best Comedy Performance for his role in Men Behaving Badly and received an Honorary Doctorate from Bournemouth University in 2007. Clunes is currently married to Doc Martin producer, Philippa Braithwaite, and they have one daughter together named Emily. The Clunes currently live in Beaminster, Dorset. 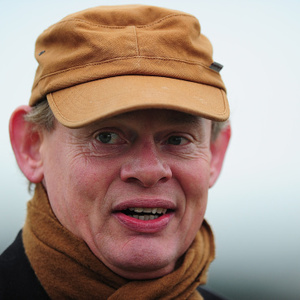