Marlee Matlin net worth: Marleee Matlin is an American actress and author who has a net worth of $11 million. Marlee Matlin was born in 1965 in Morton's Grove, Illinois. She lost all hearing in her right ear and 80% of the hearing in her left ear when she was 18 months old. Matlin graduated from John Hersey High School in Arlington Heights, Illinois and attended Harper College, a two-year community college. In 1986, 21-year old Marlee Matlin became the youngest woman in history and the only deaf performer to win the Academy Award for Best Actress for her role in "Children of a Lesser God". Matlin has appeared in many films and television shows including "My Name is Earl", "Seinfeld", "Desperate Housewives", "The L Word", "Nip/Tuck", "Law and Order: Special Victims Unit", "The West Wing", "Reasonable Doubt", "The Practice" and "Switched at Birth". Her subsequent work in film and television have brought her four Emmy nominations and a Golden Globe Award. Matlin competed on the sixth season of "Dancing with the Stars". She finished in second place on the "The Celebrity Apprentice" where she competed to win money for her charity, The Starkey Hearing Foundation. Marlee Matlin married Burbank police officer Kevin Grandalski in 1993. The couple has four children. 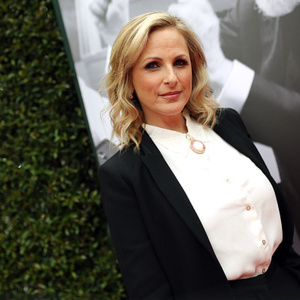