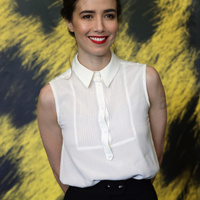 Marjorie Estiano Net Worth: Marjorie Estiano is a Brazilian actress and singer who has a net worth of $6 million. Marjorie Estiano was born in Curitiba, Parana, Brazil in March 1982. She appeared in TV commercials and theater plays. She moved to Rio de Janeiro and joined the cast of Malhacao and played Natasha in 2004 in the TV series Young Hearts. From 2006 to 2007 she starred as Marina in the TV series Paginas da vida. Estiano starred as Maria Paula in the series Two Faces from 2007 to 2008. In 2009 she starred in the series India – A Love Story. She starred as Manuela Fonseca in the 2011 series The Life We Lead and from 2012 to 2013 as Laura Assuncao in the series Side by Side. Marjorie has also starred in the films Malu de Bicicleta and Time and the Wind. She has been nominated for two Premio Contigo Awards, an Extra Television Award, and a Trofeu Imprensa Award. Her self-titled debut studio album was released in 2005. Her second studio album Flores, Amores e Blablabla was released in 2007. In 2005 she won Song of the year for Voce sempre sera.