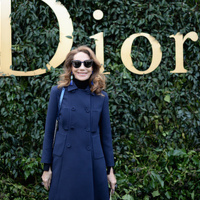 Marisa Berenson Net Worth: Marisa Berenson is an American actress and model who has a net worth of $10 million. Marisa Berenson was born in New York City, New York in February 1947. Berenson was once one of the highest paid models in the world. She appeared on the cover of Vogue and Time magazines. Marisa was called "The Queen of the Scene" for appearing frequently at nightclubs and social venues. She was nicknamed "the girl of the Seventies" by Yves Saint Laurent. Her first acting credit came in the TV series Coronet Blue in 1967. Berenson starred in the movies Death in Venice, Cabaret, Barry Lyndon, The Rise and Rise of Casanova, Killer Fish, S.O.B., Led by the Nose, The Syringe, The Secret Diary of Sigmund Freud, Night of the Cyclone, The Photographer, Primetime Murder, Lisa, Lonesome, People, Colour Me Kubrick: A True…ish Story, 24 Bars, Vote and Die: Liszt for President, I Am Love, Cineman, The Disciple, Weddings and Other Disasters, Hitler in Hollywood, Opium, and The Love Punch. Berenson won a National Board of Review Award for Best Supporting Actress in 1972. She has been nominated for two Golden Globes and a BAFTA Award.