Marina Abramovic Net Worth: Marina Abramovic is a Serbian performance artist who has a net worth of $10 million. Abramovic, who considers herself the grandmother of performance art, was born in Belgrade, Serbia on November 30, 1946. Active for more than three decades, Abramovic's performances are characteristic for exploring the boundaries of human body and the power of the mind.

In one of her acts, she even lit herself on fire in a large petroleum-drenched star. After cutting her finger nails, toe nails, and hair and thrusting them all into the fire, she made herself into the star. She passed out due to lack of oxygen and had to be removed by a medical team when she became inert to the flames approaching her. During the 1970´s she performed in a series of acts called Rhythm series. During these performances she submitted herself to a sequence of cuts and pain sessions. In one of these performances she had the audience decide what she would do with the objects that she had brought on stage. In 1976, she moved to Amsterdam where she made a mutual act with the West German performer UweLaysiepen. They performed together for around a decade. Today, Marina is still performing on stage. On November 2005, she starred in a series of performances called: "Seven Easy Pieces" in New York City. Marina has been honored with a number of awards and prizes including the New York Dance and Performances award and earned recognition for best show by the International Association of Critics in 2003. The University of Plymouth UK granted her an Honorary Doctorate of Arts in September 2009. 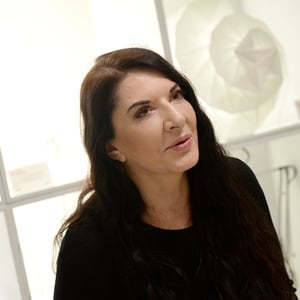