Marilyn Denis Net Worth: Marilyn Denis is a Canadian television and radio personality who has a net worth of $5 million. Marilyn Denis was born in Edmonton, Alberta, Canada in July 1958. Denis grew up in Pittsburgh, Pennsylvania and graduated from the University of Idaho. Her only son Adam is the afternoon drive time host at CKIS-FM in Toronto.

Denis started her career at a local radio station in Moscow, Idaho. She moved to Calgary to work at CJAY-FM and was a sports and entertainment reporter and weather announcer at CFCN-TV and TSN. Starting in 1986 she became a co-host of the CHUM-FM Roger, Rick, and Marilyn morning show which is now called Roger, Darren, and Marilyn. She hosted the syndicated daytime talk show CityLine on Citytv and A-Channel from 1989 to 2008. Denis won the Viewer's Choice Award at the Gemini Awards in 2005 and 2006. She was awarded The Rosalie Award in 2006 and won the Gemini for Best Host in a Lifestyle/Information Series in 2007. In 2011 she began hosting The Marilyn Denis Show on CTV. 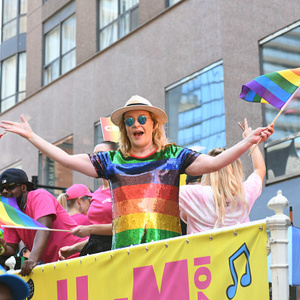