Maria Bello net worth: Maria Bello is an American actress and writer who has a net worth of $12 million dollars. Her breakthrough came when she was cast as Mrs. Smith in the TV series spy show "Mr. & Mrs. Smith", though the show was canceled after eight weeks. She then appeared in the final three episodes of the third season of "ER" as pediatrician Dr. Anna Del Amico and was a regular cast member during the long-running show's fourth season.

Early Life: Maria Elena Bello was born on April 18, 1967, in the Philadelphia neighborhood of Norristown, Pennsylvania. She is the second of four children of Kathleen, a school nurse, and Joseph Bello, Sr., a contractor. She has an older brother, Joe, Jr., a younger sister Lisa, and a younger brother Christopher. Chris is also an actor and a contractor. Her mother is of Polish descent and her father is of Italian descent. She grew up in a working-class, Catholic family. She was a cheerleader at Archbishop John Carroll High School and graduated in 1985. She attended Villanova University, where she majored in political science. She intended to go to law school and become an actor until she took an acting class during her senior year of college. Maria graduated from Villanova in 1989.

Career: After graduating from college, Maria Bello moved to New York City to take acting classes. She appeared in a number of Off-Broadway productions before moving to Los Angeles to pursue roles on television and in film. In 1996, she was cast as Mrs. Smith in the short-lived "Mr. & Mrs. Smith" television series and then began appearing as a guest star on various television shows, including "The Commish," "Nowhere Man," and "Due South." Maria started to gain international attention and critical claim for her role as pediatrician Dr. Anna Del Amico on the popular and long-running NBC program "ER." She appeared in the final three episodes of the third season and was a regular cast member during the show's fourth season.

In 1998, Bello appeared in the film "Permanent Midnight." The following year, she was in "Payback." In 2000, landed a role in "Coyote Ugly." From there her film career took off with roles in "Duets," "100 Mile Rule," "The Cooler," "Secret Window," "Assault on Precinct 13," "A History of Violence," "Thank You for Smoking," "World Trade Center," "Flicka," "The Jane Austen Book Club,"  "The Mummy: Tomb of the Dragon Emperor," "The Company Men," and "Grown Ups" (and its sequel), to name just a handful of her extensive list of film credits.

In 2010, Bello guest-starred on a couple of episodes of  "Law & Order: Special Victims Unit." The following year, she starred in the television series "Prime Suspect," which was canceled after 13 episodes. In recent years, Bello has taken her talents to the small screen appearing in "Goliath" and "NCIS." In July 2020, it was revealed that Maria would be leaving "NCIS" after eight episodes of the show's 18th season. She signed a three-year contract to be on the show in 2015 and her character's storyline has run its course.

Personal Life: Maria Bello and her ex-boyfriend Dan McDermott have a son, Jackson Blue McDermott, born in 2001. Jackson is a student at The New School in New York City. Bello and McDermott broke up in 2006. McDermott is a writer and producer.

In 2008, then 41-year-old Bello got engaged to her then 28-year-old waiter and musician boyfriend Bryn Mooser. They broke up before their wedding.

Bello co-founded WE ADVANCE with Aleda Frishman, Alison Thompson, and Barbara Guillaume after the devastating 2010 earthquake in Haiti. The organization's mission is to encourage women in Haiti to work together to healthcare a priority as well as put an end to domestic violence within their communities.

Bello is a board member of the Darfur Women Action Group.

Bello wrote about having a public same-sex relationship with Clare Munn for the Modern Love series in the New York Times around Thanksgiving 2013. She then wrote a book based on the column called "Whatever…Love Is Love: Questioning the Labels We Give Ourselves" in 2015. Bello and Munn dated from 2011 to 2016.

Bello and chef Dominique Crenn attended the 2020 Academy Awards together in their first public outing as a couple. During a red carpet interview, Bello revealed that they had become engaged over the winter holidays while visiting Paris. Crenn is a three-star Michelin chef and the first American female chef to be awarded three stars by the esteemed restaurant guide. Crenn's Michelin stars were awarded for her acclaimed San Francisco restaurant Atelier Crenn. She also owns Bar Crenn and Petit Crenn.

Crenn was diagnosed with breast cancer shortly after she began dating Maria in 2019. Crenn is cancer-free as of the summer of 2020.

Salary Highlights: Maria Bello's salary per episode of NCIS is $125,000.

Real Estate: In 2019, Maria Bello paid $2.67 million for a 2,5555 square foot, four-bedroom, three-bathroom home above Laurel Canyon in Los Angeles. The late 1960s ranch-style home sits on 0ne-third of an acre. The home features panoramic canyon and mountain views. The backyard features vine-draped pergolas, a covered dining patio, and a swimming pool and spa surrounded by flagstone. Her brothers Joe and Chris headed up the renovation of her new home.

She previously owned a two-story Craftsman bungalow in the Abbott Kinney neighborhood of Venice Beach, a modern beach house steps from the sand in Venice, as well as a home on Java Drive off Mulholland Drive in Beverly Hills where she lived with her ex-boyfriend Dan McDermott. They sold the Java Drive house when they broke up. 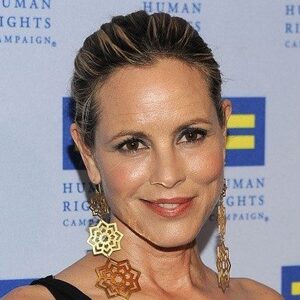