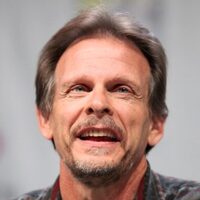 Marc Singer net worth: Marc Singer is a Canadian-American actor who has a net worth of $5 million. He is probably most-famous for starring in the "Beastmaster" and "V" film franchises.

Marc Singer was born in Vancouver, British Columbia, Canada in January 1948. From 1984 to 1985 he starred as Mike Donovan in the television series V. Singer starred as Matt Cantrell in the TV series Dallas in 1986. In 1999 he starred as Chet on the soap opera The Young and the Restless. From 2001 to 2002 he starred as Dartanus on the series BeastMaster. Singer has also starred as General Matthew Shrieve in the television series Arrow in 2015 and as Peter Braxton in the TV series Beauty and the Beast in 2016. Singer starred as Dar in the movie The Beastmaster in 1982 and the sequel Beastmaster 2: Through the Portal of Time in 1991. He has also appeared in several other TV shows and films including Hawaii Five-O, Barnaby Jones, Roots: The Next Generations, Battle of the Network Stars XVII, and Simon & Simon.