Mamie Van Doren net worth: Mamie Van Doren is an American actress, model, and singer who has a net worth of $10 million. Mamie Van Doren was born in Rowena, South Dakota in February 1931. She is known for recreating the look of Marilyn Monroe. As an actress she has appeared in several films including His Kind of Woman, Two Tickets to Broadway, Forbidden, The All American, Francis Joins the WACS, Ain't Misbehavin', Running Wild, Star in the Dust, Untamed Youth, The Girl in Black Stockings, Jet Pilot, Teacher's Pet, High School Confidential, Born Reckless, Guns, Girls, and Gangsters, The Beat Generation, Girls Town, Vice Raid, College Confidential, The Private Lives of Adam and Eve, The Candidate, The Las Vegas Hillbillys, Voyage to the Planet of Prehistoric Women, Slackers, and more.

Mamie Van Doren was awarded a star on the Hollywood Walk of Fame in 1994 at 7057 Hollywood Blvd. She has been married five times including to Ray Anthony. 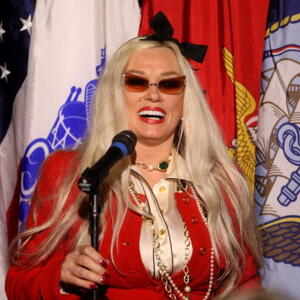