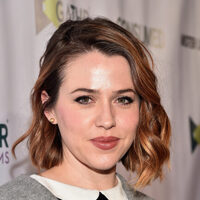 Majandra Delfino Net Worth: Majandra Delfino is a Venezuelan-American actress and singer who has a net worth of $3 million. Majandra Delfino was born in Caracas, Venezuela in February 1981. Majandra moved with her family to Miami, Florida in 1984. Her debut screen role came in the 1997 film Zeus and Roxanne. From 1997 to 1998 she starred as Tina DiMeo in The Tony Danza Show. She starred in the 1999 movie The Secret Life of Girls as Natalie Sanford. The same year Delfino starred as Sara Shotz on the TV series Katie Joplin. Majandra starred in the movies Traffic, The Learning Curve, and R.S.V.P. From 1999 to 2002 she starred in the series Roswell. In 2008 she starred as Vanessa in the television series Quarterlife and in 2011 as Jo Pye in the series State of Georgia. In 2014 Delfino starred as Andi in the TV series Friends with Better Lives. She has been nominated for ALMA Awards in 1998 and 2000 and for a Young Artist Award in 2000. As a singer Majandra released her EP The Sicks in 2001. Her second album Tarte was released in 2007. Majandra is the younger sister of actress Marieh Delfino.