Maite Perroni Net Worth: Maite Perroni is a Mexican actress and singer-songwriter who has a net worth of $6 million. Maite Perroni was born in Mexico City, Mexico in March 1983. Perroni has starred in the telenovelas Rebelde, Cuidado con el angel, Mi Pecado, Triunfo del Amor, Cachito de Cielo, and La Gata.

She has also appeared in the television shows RBD: La Familia in 2007 and Mujeres Asesinas 3 in 2010. Her film debut came in 2012's El Arribo de Conrado Sierra as Ninfa. Perroni has also acted in theater in 2010's Cena de Matrimonios as Elisa. Before acting she was a part of the band RBD. The group has released nine studio albums and has recorded albums in Spanish, English, and Portuguese. All together they have sold more than 15 million albums worldwide. Perroni composed their fourth Spanish language album Empezar Desde Cero. Her debut solo studio album Eclipse De Luna was released in 2013. Maite serves as spokes model for NYX Cosmetics. A Barbie doll was released based on her character in Rebelde in 2007. She has also starred in many commercials for brands such as Pepsi, Walmart, and Pantene. Perroni has won two TVyNovelas Awards and three Premios Juventuds. She has also won two People en Espanol Awards. Maite was formerly engaged to RBD's musical director Guido Laris. 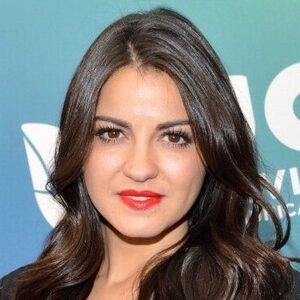