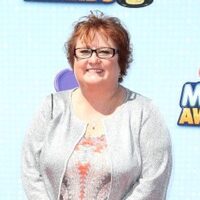 Maile Flanagan net worth: Maile Flanagan is an American actress who has a net worth of $8 million. Maile Flanagan was born in Honolulu, Hawaii in May 1965. She has more than 100 acting credits to her name and is known for providing the voice of Naruto Uzumaki in Naruto. Flanagan starred as Geri O'Flanagan in the television series 3Way from 2008 to 2009. From 2012 to 2016 she starred as Perry in the TV series Lab Rats. Flanagan has starred in the movies Phone Booth, The Station Agent, Evan Almighty, Yes Man, Transformers: Dark of the Moon and more. She won a Daytime Emmy Award in 2006 for Outstanding Performer in an Animated Program for Jakers! The Adventures of Piggley Winks. Flanagan has also won two Behind the Voice Actors Awards.