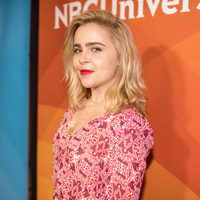 What is Mae Whitman's net worth and salary?

Mae Whitman was born Mae Margaret Whitman on June 9, 1988, in Los Angeles, California. Her mother, Pat Musick, is a voice actress with more than 100 credits to her name, including the 1986 film "An American Tail." Her father, Jeffrey Whitman, has worked as a set construction coordinator and a personal manager. Mae attended  the private school Ribét Academy.

At just 2 years old, Whitman landed her first job: a voice-over for a Tyson Chicken commercial. She made her film debut at age 6 in 1994's "When a Man Loves a Woman," playing the daughter of Meg Ryan's Alice Green. In 1996, Mae played the daughter of President Thomas J. Whitmore (Bill Pullman) in the blockbuster "Independence Day" (which grossed $817.4 million at the box office) and the daughter of George Clooney's Jack Taylor in "One Fine Day." That year she also guest-starred on "Friends" and "Early Edition" and began playing Sara Wilmette on the CBS medical drama "Chicago Hope," appearing in 17 episodes. In 1998, she starred as the daughter of Sandra Bullock's Birdee Pruitt in "Hope Floats" and had a recurring role as Chloe Madison on "JAG." From 2001 to 2002, Whitman starred on the Fox Family Channel series "State of Grace" alongside her future "Arrested Development" co-star Alia Shawkat, then she voiced Shanti in "The Jungle Book 2" (2003) and Leslie in "Teacher's Pet" (2004). From 2004 to 2006, Mae played Ann Veal (also known as "Egg," "Bland," and "Her?"), the girlfriend of Michael Cera's George Michael Bluth, on the critically-acclaimed sitcom "Arrested Development." The series aired three seasons on Fox, and Whitman returned to the series when it was revived by Netflix in 2013.

In August 2021, Mae revealed on Twitter that she is pansexual, stating, "I know ppl might be unfamiliar with what pansexual means; for me it means I know I can fall in love with people of all genders. This is the word that fits me best and I'm proud+happy to be part of the Bi+ community."

Between 1997 and 2002, Whitman won three Young Artist Awards: Best Performance in a Feature Film – Actress Age Ten or Under for "One Fine Day" (1997) and "Hope Floats" (1999) and Best Ensemble in a Feature Film for "An American Rhapsody" (2002). She also received a Best Performance in a Feature Film – Supporting Young Actress nomination for "An American Rhapsody" and a Best Performance in a TV Comedy Series – Leading Young Actress nomination for "State of Grace" (2002). Mae won a Golden Apple Award for Youth Female Discovery of the Year in 2001 and a Gracie Allen Award for Outstanding Female Actor in a Breakthrough Role for "Parenthood" in 2015, and she shared a San Diego Film Critics Society Award for Best Ensemble Performance with her "The Perks of Being a Wallflower" co-stars in 2012. Mae has been nominated for 18 Behind the Voice Actors Awards, winning Best Female Vocal Performance in a TV Special/Direct-to-DVD Title or Short for "Secret of the Wings" (2013), Best Female Lead Vocal Performance in a Television Series – Action/Drama for "Teenage Mutant Ninja Turtles" (2014), and Best Vocal Ensemble in a Television Series for "Teenage Mutant Ninja Turtles" (2017). She also earned Behind the Voice Actors Award nominations for "Young Justice," "The Pirate Fairy," "Kaze tachinu," "DC Super Hero Girls: Hero of the Year," and "Prey."