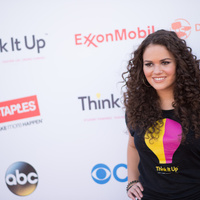 Madison Pettis net worth: Madison Pettis is an American actress who has a net worth of $500 thousand. Madison Pettis was born in Arlington, Texas, and began her professional career as a model when she was child. Her mother entered her into a local cover search contest for the parenting magazine, "Fort Worth Child", and she began working almost immediately. She began her professional on-camera career appearing in commercials, and then moved on to roles in film and television projects. She became widely recognized appearing on the television show "Barney & Friends" as Bridget. From there, she went on to a starring role on the Disney Channel series, "Cory in the House". She also guest starred on "The 4400", "Special Agent Oso", and "R.L. Stine's The Haunting Hour". She has also appeared in co-starring or starring roles in such films as "The Game Plan", "Seven Pounds", and "Free Style". She voices Adyson Sweetwater on "Phineas and Ferb", and currently co-stars as Allie Brooks on the series, "Life with Boys".