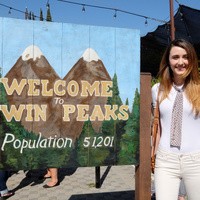 Madeline Zima net worth: Madeline Zima is an American actress who has a net worth of $1.5 million dollars. Madeline Zima as born in New Haven, Connecticut, and began her professional acting career when she was still in diapers, appearing in commercials. She has since gone on to a steady career in both film and television projects. She has appeared in such films as "The Hand That Rocks the Cradle", "Mr. Nanny", "'Til There Was You", "A Cinderella Story", "Streak", "The Collector", and a "Crazy Kind of Love", among other titles. On television, she has appeared in guest starring, recurring, and co-starring roles on such shows as "Law and Order", "Touched by an Angel", "Lethal Vows", "The Nightmare Room", "Gilmore Girls", "7th Heaven", "Strong Medicine", "Ghost Whisperer", "Grey's Anatomy", "Californication", "Heroes", "Royal Pains", and "The Vampire Diaries". She is most widely recognized for her work as Grace Sheffield on "The Nanny". She is next slated to co-star in the new series, "Gilded Lillys".