Lyndsy Fonseca Net Worth: Lyndsy Fonseca is an American actress who has a net worth of $2 million. Lyndsy Fonseca was born in Oakland, California in January 1987. Lyndsy was discovered by a talent agent in San Francisco. Her first TV appearance came as Colleen Carlton from 2001 to 2005 on the soap opera The Young and the Restless.

She had a recurring role as Jenn Cardell on the series Boston Public in 2003. In 2006 Fonseca starred as Annabelle Marks on the TV series Waterfront and from 2006 to 2009 as Donna on the series Big Love. From 2007 to 2009 she starred as Dylan Mayfair on the show Desperate Housewives. Since 2005 Lyndsy has starred in the CBS sitcom How I Met Your Mother. She also starred as Alex on the series Nikita from 2010 to 2013. She has starred in the movies Remember the Daze, Kick-Ass, Hot Tub Time Machine, The Ward, and Kick-Ass 2. She has appeared in episodes of Malcolm in the Middle, NYPD Blue, Phil of the Future, CSI: Crime Scene Investigation, House M.D., and Heroes. Fonseca has been nominated for a Scream Award, two Screen Actors Guild Awards, and three Teen Choice Awards. Lyndsy married Matthew Smiley in 2009 but the couple divorced in 2013. 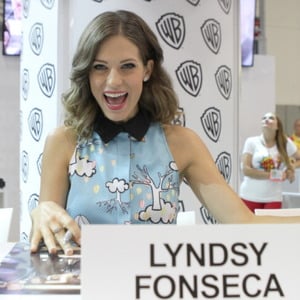