Lymari Nadal Net Worth: Lymari Nadal is a Puerto Rican actress, film producer and scriptwriter who has a net worth of $10 million. That is a combined net worth with her husband, fellow actor Edward James Olmos.

Lymari Nadal (Torres) was born February 11, 1978 in Ponce, Puerto Rico. She has performed in several films, including American Gangster and Battlestar Galactica: The Plan. In 2011 she produced her own film, América, for which she was also its writer. Nadal graduated from high school at Academia Santa María. She received a college degree from the Pontifical Catholic University of Puerto Rico. In 2001, she moved to Los Angeles, California and later married actor and director Edward James Olmos in 2002. She had always wanted to be an actress, but even after completing acting classes in England and Mexico she was still rejected by the acting industry. It was when she began to take part in her husband's theatrical arts company as a producer and making plans to open a film school in her native Puerto Rico that her world broadened. She is probably most widely known for her role as Frank Lucas's wife in the movie American Gangster. She also had appearances in American Family (2002) as the character Linda; Battlestar Galactica Miniseries (2003) as the character Giana; Ladrones y Mentirosos (2006) as the character Marisol; Battlestar Galactica: The Plan (2009) as the character Giana O'Neill; America (2011) as the character America. 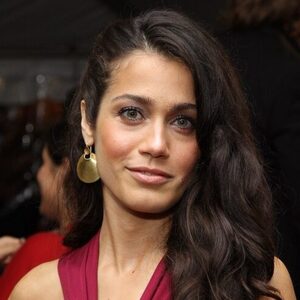