Luke Perry Net Worth: Luke Perry was an American actor who had a net worth of $10 million at the time of his death in 2019. Perry was best known for his role as Dylan McKay on the long-running Fox series "Beverly Hills, 90210." The show ran from 1990 to 2000, and Luke appeared in 199 of the show's 293 episodes. Perry appeared in nearly 100 film and television projects, and some of his earliest roles were on the soap operas "Loving" (1988) and "Another World" (1988–1989). His notable films include "Buffy the Vampire Slayer" (1992), "8 Seconds" (1994), and "The Fifth Element" (1997). Luke made his Broadway debut in 2001, starring as Brad Majors in "The Rocky Horror Picture Show," and he played Harry in a London production of "When Harry Met Sally …" in 2004. In 2017, Perry began starring as Fred Andrews on The CW series "Riverdale," which features characters from Archie Comics and is described as "a bold, subversive take on Archie, Betty, Veronica and their friends, exploring the surreality of small-town life." Luke's final film was Quentin Tarantino's "Once Upon a Time in Hollywood," which was released a few months after his untimely death.

Early Life: Luke Perry was born Coy Luther Perry III on October 11, 1966, in Mansfield, Ohio. His mother, Ann, was a homemaker, and his father, Coy, was a steelworker. Luke had two siblings, brother Tom and sister Amy, and their parents divorced in 1972. Ann married construction worker Steve Bennett and had a daughter, Emily, with him. Coy passed away from a heart attack in 1980, and in an interview with "People" magazine, Perry said of his biological father, "He was violent. He was a drunk. He treated my mother very poorly." Luke attended Fredericktown High School, where he served as the school mascot, Freddie Bird. As a teenager, he had an uncredited role on the NBC series "Voyagers!" in 1992.

Career: After graduating from high school in 1984, Perry moved to Los Angeles to pursue an acting career. He found work at a doorknob factory and asphalt paving company, and in 1985, he appeared in Twisted Sister's "Be Chrool to Your Scuel" video. By the time Luke landed a guest-starring role on "Loving" in 1988, he had gone on 256 auditions. Around that time, he was also cast on "Another World," appearing in 10 episodes. In 1990, Perry was cast in the role that would catapult him to fame and turn him into a teen idol: Dylan McKay on "Beverly Hills, 90210." When he showed up to a 1991 autograph signing at a Florida mall, he had to leave after 90 seconds due to a riot breaking out among the 10,000 teen girls in attendance. Luke's first film was 1991's "Scorchers," followed by "Terminal Bliss" and "Buffy the Vampire Slayer" in 1992. In 1993, he hosted "Saturday Night Live" and lent his voice to the "Krusty Gets Kancelled" episode of "The Simpsons," and the following year, he portrayed real-life rodeo cowboy Lane Frost in "8 Seconds" and began voicing Napoleon Brie on the animated series "Biker Mice from Mars." 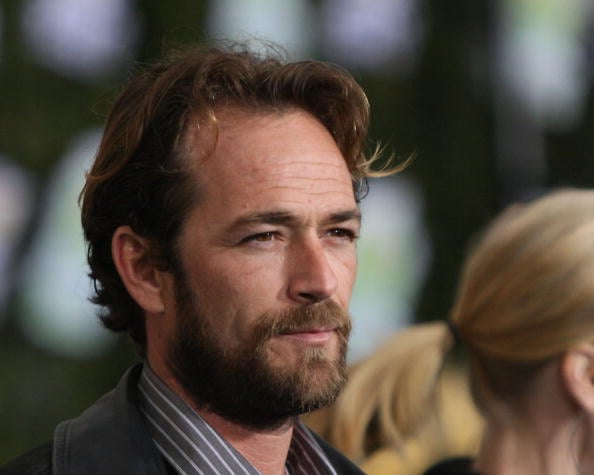 Luke starred in the films "Redemption Road" (2010), "The Final Storm" (2010), "Good Intentions" (2010), and "Red Wing" (2013), then guest-starred on "Community" (2013) and "Major Crimes" (2014) and played CDC Officer Dr. Charlie Stafford on five episodes of "Body of Proof" (2012–2013). In 2017, he was cast as Fred Andrews, father of Archie Andrews, on "Riverdale." The owner of Andrews Construction and a one-time mayoral candidate, Fred was considered by many to be the heart of "Riverdale," and after Perry's death, "Vanity Fair" stated that his "empathetic understanding of his character and the world he occupies, Riverdale…has given the show its emotional core." Luke's final film role was actor Wayne Maunder in 2019's "Once Upon a Time in Hollywood," which went on to earn a Golden Globe Award for Best Motion Picture – Musical or Comedy as well as an Oscar nomination for Best Picture.

Personal Life: Luke married Rachel Sharp (better known as Minnie) on November 20, 1993, and they welcomed son Jack on June 16, 1997, and daughter Sophie on June 7, 2000. Jack is a professional wrestler with All Elite Wrestling who goes by the ring name Jungle Boy. Luke and Rachel divorced in 2003. In 2015, Perry had pre-cancerous growths removed after undergoing a colonoscopy. The experience inspired him to begin advocating for colorectal cancer testing and create a will that named Jack and Sophie as his sole beneficiaries. At the time of Luke's tragic death, he was engaged to marriage and family therapist Wendy Madison Bauer. The couple had been planning to wed on August 17th, 2019, and after Perry's death, Bauer released a statement that said "The past 11½ years with Luke were the happiest years of my life, and I am grateful to have had that time with him."

Death: On February 27, 2019, Perry had an ischemic stroke at his Los Angeles home. He never regained consciousness, and after he suffered a second stroke, his family made the difficult decision to remove him from life support. Luke passed away on March 4, 2019, at the age of 52, and he was buried on his family's Tennessee farm in a mushroom burial suit, an eco-friendly option meant to "aid in decomposition, work to neutralize toxins found in the body and transfer nutrients to plant life." After Perry's death, many of his former co-stars gave tributes to him, including Jennie Garth, who stated "My heart is broken. He meant so much to so many. Such a very special person. I share my deep sadness with his family and all who loved him. Such a terrible loss." His "Riverdale" son, KJ Apa said of Luke, "He's one of the best people I've ever known in my life. I hope I can be half the man that he was." He also revealed that his TV dad treated him like a son off-screen as well, saying "He would call my parents every week and keep them updated on how I'm doing. If I had a cold or something he'd be like, 'I got him, I brought some Gatorade to his apartment the other day.'"

At the time of Perry's death, he had filmed four episodes of "Riverdale" that hadn't aired yet, and the show's creator, Roberto Aguirre-Sacasa, stated that every future episode of the series would be dedicated to Luke. On October 9, 2019, the show's addressed the death of Luke/Fred Andrews with the heartbreaking episode "Chapter Fifty-Eight: In Memoriam," a beautiful tribute to Perry that included his "Beverly Hills, 90210" co-star Shannen Doherty. On the day the episode aired, Doherty wrote on social media, "I am deeply honored to pay tribute to Luke on Riverdale. The care in which this show takes in honoring his memory is beautiful. He is missed. Today. Tomorrow. Forever."

Awards and Nominations: Perry won Bravo Otto awards for Best Male TV Star for "Beverly Hills, 90210" in 1992, 1993, and 1994. The series also earned him a Kids' Choice Award nomination for Favorite TV Actor in 1993 and TV Land Award nominations for Favorite Teen Dream – Male in 2004 and Break Up That Was So Bad It Was Good (shared with Shannen Doherty) in 2007. Luke received a DVD Exclusive Award nomination for Best Supporting Actor for "Attention Shoppers" in 2001 and a People's Choice Award nomination for Favorite Scene Stealing Guest Star for "Law & Order: Special Victims Unit" in 2009. In 2020, the cast of "Once Upon a Time… in Hollywood" earned nominations from the Screen Actors Guild Awards, CinEuphoria Awards, Faro Island Film Festival, and Online Film & Television Association, and the Gold Derby Awards nominated them for both Ensemble Cast and Ensemble of the Decade. 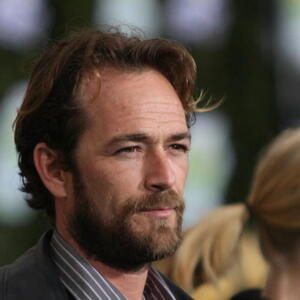