Luke Goss Net Worth: Luke Goss is an English singer and actor who has a net worth of $16 million dollars. Blessed with good looks and multiple talents, he has built a solid reputation in the entertainment industry. Born Luke Damon Goss on 29 September 1968, in London, he is just eleven minutes older than his twin brother, Matt.

It was together with Matt that Luke would start the boy band "Bros", with which they charted thirteen hit singles in the UK. Aside from the popularity they enjoyed, the band split in the early 1990s and Luke moved on to be a member of the "Band of Thieves". After four singles with the Thieves, Goss switched to acting as he landed the lead role in the 1996 musical play "Plan 9 From Outer Space". Next, he appeared in stage musicals like "Grease" and "What a Feeling". In 2002, Luke had already established himself as a screen actor, featuring in two films that year: David Goyers "ZigZag" and Guillermo del Toro´s "Blade II". "Blade II" was, in reality, his first noticeable role. He also had a villain´s role in the action comedy "The Man" with Samuel L. Jackson and Eugene Levy. After making a series of films, Goss worked again with Guillermo del Toro playing Prince Nuada in the blockbuster "HellBoy 2: The Golden Army". One of the biggest movie events for Luke Goss came in 2010 when he was given the role of Frankestein in "Death Race 2". He went on filming another film for the franchise: "Death Race: Inferno". These films helped establish Goss as an action man. Luke Goss married backup singer Shirley Lewis. They have been married since 1994 and they have a daughter (actually Luke's stepdaughter) named Carli. Aside from his singing and acting career, Luke also wrote an autobiography: "I Owe You Nothing" in the 1990s that became a bestseller and had three printings to it. 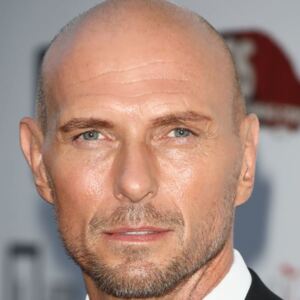