Luise Rainer Net Worth: Luise Rainer was a German-born, Austrian and American retired actress who had a net worth of $1.5 million at the time of her death. Luise died on December 2014 at the age of 104/ Luise Rainer was born in Dusseldorf, Germany in January 1910. She became the first person to win multiple Academy Awards and also the first to win the awards consecutively.

Talent scouts from Metro-Goldwyn-Mayer discovered Luise while she was acting on stage in Austria and Germany. Rainer is the oldest living Academy Award winner and is one of the last leading ladies from the 1930s still alive today. At 16 years old she trained with stage director Max Reinhardt. She became a popular Berlin stage actress and was signed by MGM to a three year deal that moved her to Hollywood, California. Rainer made her American debut in the movie Escapade in 1935. Her next film was The Great Ziegfeld in 1936 for which Rainer won an Oscar for Best Actress in a Leading Role. She won the award again the next year for the movie The Good Earth. After winning two consecutive Oscars she felt that audience expectations were too high and she was given roles in unimportant movies, ultimately moving back to Europe. After nearly 20 years away from the screen she appeared in The Love Boat in 1984. Her last role came in the 1997 movie The Gambler. She was awarded a star on the Hollywood Walk of Fame in 1960 located at 6300 Hollywood Blvd. 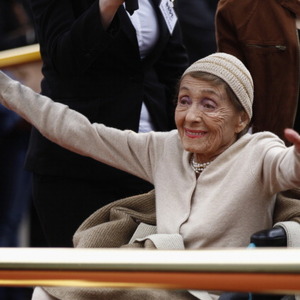