Luis Guzman net worth: Luis Guzman is a Puerto Rican-born actor, writer and producer who has a net worth $13 million. A well-respected character actor who specializes in playing tough guys with a heart, he has appeared in a dizzying array of film and television productions since he began his professional acting career in the early 1980s. He is best known for his roles in "Magnolia," "Boogie Nights," and "Punch-Drunk Love." His career has spanned over forty years.

Early Life: Luis Guzman was born on August 28, 1956 in Cayey, Puerto Rico and was raised in New York City's Greenwich Village by his mother Rosa, a hospital worker, and his stepfather Benjamin Cardona, a TV repairman.  He graduated from City College and worked for some years as a youth counselor at the Henry Street Settlement House.

Career: During his time as a social worker, he began performing in street theatre and independent films. On television, he became a regular presence thanks to a recurring role on the HBO prison drama Oz, as well as appearances on such shows as Law and Order, NYPD Blue, and Walker, Texas Ranger. Guzman's big break came in 1997 when he starred in Paul Thomas Anderson's "Boogie Nights" as Maurice Rodriguez. Some of his other many movie credits include Carlito's Way, Carlito's Way: Rise to Power, Welcome to Collinwood, Stonewall, Waiting…, The Salton Sea, and Lemony Snicket's A Series of Unfortunate Events. In 2002, Guzman was nominated for an Imagen Award for Best Supporting Actor when he co-starred with Adam Sandler in another Paul Thomas Anderson film, "Punch Drunk Love." Guzman has also appeared in the TV shows; "Homicide: Life on the Street," "Frasier," and "Oz." He voiced Richardo Diaz in the video game "Grand Theft Auto: Vice City" and its prequel "Grand Theft Auto: Vice City Stories." Guzman has been a commentator on VH1's "I Love the '80s," as well as "I Love Toys" and its sequels, "I Love the '70s" and "I Love the '90s." In 2007, he co-starred on the canceled 2007 HBO series "John from Cincinnati."

In the low-budget slice-of-life comedy "Waiting" (2005), about a waiter (Justin Long) who rues his dead-end life, Guzman played a cook at a restaurant who likes to do disgusting things to himself and the food. In early 2008, he starred in several TV ads for Cabot Creamery, which is located in Cabot, Vermont, near to where he lives. He co-starred in "The Taking of Pelham 123" (2009), playing one of several armed hijackers led by an ex-con (John Travolta) who take over a subway train. He also appeared in the music video "Yes We Can."

Guzman also starred in the Steven Soderbergh films "Out of Sight," "The Limey," and "Traffic." For his performance in "The Limey," Guzman was nominated for an Independent Spirit Award for Best Supporting Male. Guzman stars in HBO's How to Make It in America. From 2015-2018, Guzman starred in the CBS medical drama "Code Black," portraying senior nurse Jesse "Mama" Salander. He also co-starred on Cameron Crowe's "Roadies," a comedy-drama on showtime. In "Roadies," he played Gooch, a seasoned crew tour bus driver. In 2016, Guzman starred in six episodes of "Narcos." Having appeared in numerous high profile features and television shows, actor Luis Guzman developed into a prominent character actor equally adept at performing in comedies and dramas. He is next slated to appear in the film "Bread and Games."

Personal Life: Luis is married to Angelita Galarza and has five children. The family resides in Vermont. Guzman endorsed Senator Bernie Sanders for President in the 2016 U.S. presidential election. 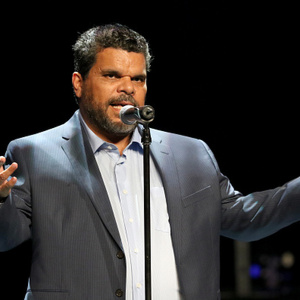