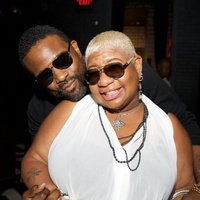 Luenell Net Worth: Luenell is an American comedian and actress who has a net worth of $250 thousand dollars. Luenell was born in Tollette, Arkansas in March 1959. She is the youngest of nine children and was raised in Northern California. She appeared on the local television program Soul Beat. She toured for two years with and appeared on the documentary Katt Williams: American Hustle. Luenell's acting debut came in the 1993 movie So I Married an Axe Murdered. She has starred in the movies The Rock, Never Die Alone, Borat: Cultural Learnings of America for Make Benefit Glorious National of Kazakhstan, Divine Interventions, The Hustle, Spring Breakdown, All About Steve, Budz House, 35 and Ticking, Think Like a Man, That's My Boy, C'Mon Man, Mac & Devin Go to High School, Taken 2, Dealin' with Idiots, A Christmas Blessing, Think Like a Man Too, and School Dance. She has appeared in episodes of I Love the New Millennium, Undateable, Latino 101, Nash Bridges, The Tracy Morgan Show, The Boondocks, The Middle, It's Always Sunny in Philadelphia, and Californication. Luenell wrote and co-produced an episode of Funny or Die Presents in 2011.