Lucy Davis Net Worth: Lucy Davis is an English actress who has a net worth of $3 million. LShe is widely known for her role as the character Dawn Tinsley in the BBC comedy The Office and as Dianne in the horror-comedy movie Shaun of the Dead. The daughter of actor Jasper Carrott, Davis appeared briefly in an episode of The Detectives, a show created by her father (who also starred in the show).

Lucy Davis was born February 17, 1973 in Solihull, United Kingdom. She played Maria Lucas in the BBC's 1995 production of Pride and Prejudice, during which time she underwent a physical which resulted in the discover that she needed a kidney transplant; her kidney donor was her own mother. Close to Christmas in 2005 she was hospitalized once again because of kidney failure, but has since recovered. Davis is also a diabetic.

Following her breakthrough role in The Office, she appeared in the film Sex Lives of the Potato Men and Shaun of the Dead (both 2004), while continuing to play Hayley Jordan in The Archers on BBC Radio 4. She gave up the latter role when her other acting responsibilities became too much. She appeared in the episode Elephants and Hens of UK TV program Black Books and in 2006 Davis appeared as the 'Fashion TV' host on ABC's hit Ugly Betty. Later that year she played writer Lucy Kenwright in NBC's Studio 60 on the Sunset Strip. Other shows she appeared in include The Mentalist, Some Guy Who Kills People and others. In 2012, Davis had a guest voice part in Family Guy for the episode Be Careful What You Fish For. That same year Davis became a Patron for the performing arts group Theatretrain.

She married Owain Yeoman in 2006. Their wedding made big news as it took place at St. Paul's Cathedral in London, which is usually reserved strictly for royal weddings. They divorced in 2011. 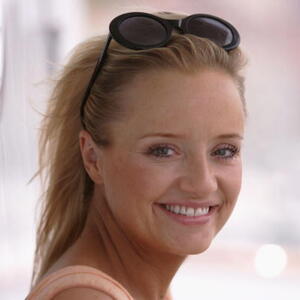