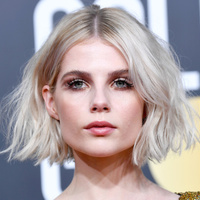 Lucy Boynton net worth: Lucy Boynton is an English American actress who has a net worth of $3 million. Lucy Boynton was born in New York City, New York in January 1994. She grew up in London and she is the daughter of Graham Boynton. Lucy Boynton starred as Allison Adams on the television series Gypsy in 2017. In 2019 she starred on the TV series The Politician. In 2008 she had a recurring role on the TV mini-series Sense & Sensibility as Margaret Dashwood. Boynton has appeared in films including Miss Potter, Copperhead, The Blackcoat's Daughter, Sing Street, I Am the Pretty Thing That Lives in the House, Don't Knock Twice, Rebel in the Rye, Let Me Go, Murder on the Orient Express, Apostle, and Bohemian Rhapsody. Lucy Boynton was nominated for a Screen Actors Guild Award for Outstanding Performance by a Cast in a Motion Picture for Bohemian Rhapsody in 2019. At some point during filming she began dating her Bohemian Rhapsody co-star Rami Malek. She was also nominated for a Young Artist Award in 2007 for Best Performance in a Feature Film – Supporting Young Actress for Miss Potter.