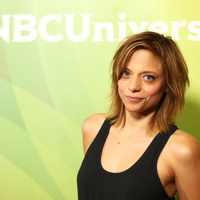 Lizzie Brocheré Net Worth: Lizzie Brocheré is a French film, theater and television actress who has a net worth of $2 million. Lizzie Brocheré was born March 22, 1985 in Paris, France. She is best known for her work in French art house cinema and for her role in the FX series American Horror Story: Asylum. Her acting career began at the age of 10 in the 1995 television movie Parents à mi-temps. Brocheré would go on to play a string of small roles in television movies and series including Les Enquêtes d'Éloïse Rome, Sydney Fox l'aventurière, Camping Paradis and Sauveur Giordano. In 2001, a 16-year-old Brocheré made her debut on the big screen as Jeanne in Hugo Santiago's Le Loup de la côte ouest (English title: The Wolf of the West Coast). In 2004, Brocheré played the supporting role of Gladys in Bernard Rapp's Un petit jeu sans conséquence. That same year she landed the recurring role of Eva in the Television series Alex Santana, négociateur (2004-2007). In 2006, she played recurring character Cécile Chalonges in the French-Swiss Television series R.I.S, police scientifique (2006-2008), a remake of an Italian crime drama. That same year Brocheré starred in the controversial Chacun sa nuit (English title: One to Another), directed by Jean-Marc Barr and Pascal Arnold, as the sensual (and often nude) Lucie who sleeps with her brother and inspires violent jealousy in her close-knit circle of bisexual friends. In 2007, Lizzie Brocheré was awarded Best Newcomer at the Luchon Film Festival for her lead in comedy Bac+70. In 2008, Brocheré portrayed the leading role in Karin Albou's film Le Chant des mariées in 2008—Myriam, a Jewish Tunisian young girl in WW2 Tunisia. She was awarded Best Actress at the St Jean de Luz Film Festival. In 2009, Brocheré was cast in Les Bleus where she was series regular Elina, a free-spirited, young, Russian cop. In 2011, she played in Eric Shaeffer's romantic comedy After Fall, Winter as Sophie, a French hospice worker and BD/SM dominatrix. In April 2012 she was cast a role in the US thriller/horror series American Horror Story.