How much is Liz Bonnin Worth?

Liz Bonnin net worth and salary: Liz Bonnin is a French-Irish television personality who has a net worth of $4 million. Liz Bonnin was born in France in September 1976. Her mother was of Indian-Portuguese descent and her father was of French-Martinique descent. Liz has worked in television in both the United Kingdom and Ireland. Early in her career she joined the girl pop group called Chill which broke up before they even began recording a record. She was then hired to host the IRMA Awards and gained presenting roles on RTE Television. Bonnin has presented on television series such as Ghost Towns, Museum of Life, Country Tracks, Bang Goes the Theory, Springwatch, Stargazing Live: Back to Earth, and Stargazing Live. She has a master's degree in Wild Animal Biology and works on big cat conservation programs. She has since carved out a niche for presenting nature and science shows. In 2015 she has presented a documentary series called Animals in Love for BBC One. In 2016 she presented several shows including Horizon – Should We Close our Zoos. In 2017 and 2018 she continued to present shows on topics ranging from the Alaskan wild and our overuse of plastic on earth. 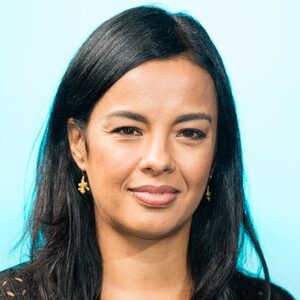