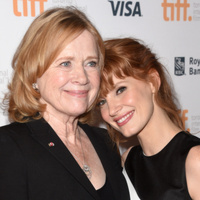 Liv Ullmann net worth: Liv Ullmann is a Norwegian actress and film director who has a net worth of $20 million. Liv Ullmann was born in Tokyo, Japan in December 1938. She has starred in several films including Shame, Hour of the Wolf, An-Margritt, The Passion of Anna, Cold Sweat, The emigrants, The Night Visitor, The New Land, Cries and Whispers, Pope Joan, Scenes from a Marriage, 40 Carats, Lost Horizon, Face to Face, A Bridge Too Far, Autumn Sonata, Let's Hope It's a Girl, Farewell Moscow, The Girlfriend, The Rose Garden, and more. Ullmann has also directed the films Sofie, Private Confessions, Faithless, and Miss Julie among others. She won a Golden Globe Award in 1974 for Best Actress in a Motion Picture – Drama for Utvandrarna. Liv Ullmann was nominated for Academy Award sin 1973 and 1977 for Best Actress in a Leading Role. She was married to Ingmar Bergman and Dragan Babic and her daughter is journalist Linn Ullmann.