Linsey Godfrey net worth: Linsey Godfrey is an American actress who has a net worth of $600 thousand. Linsey Godfrey was born in Stuart, Florida in July 1988. After high school Godfrey moved to Los Angeles, California to pursue her acting career. In 2006 she was diagnosed with Hodgkin's lymphoma and completed treatment.

Her first acting credit came in an episode of the TV series One Tree Hill in 2006. In 2006 she had a recurring role as Caitlin Blum in the television series Surface. Her best known role has come as Caroline in the soap opera The Bold and the Beautiful since 2012. She starred in the movies The House Bunny, The Culling, and Altergeist and also appeared in episodes of the TV series NCIS, Cold Case, The Suite Life on Deck, CSI: Miami, Wizards of Waverly place, and The Young and the Restless. In 2014 she was nominated for a Daytime Emmy Award for Outstanding Younger Actress in a Drama Series for The Bold and the Beautiful. Linsey gave birth to her first daughter with her boyfriend Robert Adamson from The Young and the Restless. In February 2015 Godfrey was injured in an automobile accident after being hit by a car while walking on the sidewalk in Los Angeles. 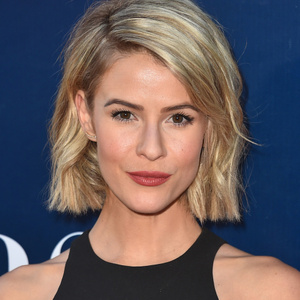