Lily Rabe Net Worth: Lily Rabe is an American actress who has a net worth of $2 million. Lily Rabe was born in New York City, New York, in 1982. She was an avid dancer and even began teaching ballet during the summer before she was asked to deliver a monologue on-stage.

While doing so, Rabe realized she had a passion for acting, and began studying it at Northwestern University in the Chicago suburbs. She made her on-screen debut in "Never Again" in 2001 and her stage debut a year later in a production of "Speaking Well of the Dead" and "The Crazy Girl". She appeared in "Mona Lisa Smile" before earning her bachelor's in theatre from Northwestern and moving back to New York City. Once in Manhattan, Rabe scored a part in the production "White Jesus" and made her Broadway debut in 2005's "Steel Magnolias". Rabe has since appeared in a handful of stage productions and earned a 2011 Tony Award nod for Best Actress in a Play for 2011's "The Merchant of Venice". She returned to movies in 2006's "A Crime", which she followed up with appearances in "No Reservations", "What Just Happened", "All Good Things", and "The Hunger Games – Mockingjay –Part 1". Her TV credits include small roles on "Nip/Tuck", "Medium", "Saving Grace", "Law & Order", and "The Good Wife". In 2011, Rabe began starring on "American Horror Story". She appeared in seven episodes of "Murder House" as Nora Montgomery, ten episodes of "Asylum" as Sister Mary Eunice McKee, and ten episodes of "Coven" as Misty Day. Rabe was nominated for a Critics' Choice Television Award for Best Movie/Miniseries Supporting Actress for her performance on "Asylum". She is set to appear in 2014's "The Whispers" as Claire Bennigan. Rabe is dating actor Hamish Linklater, who is best known for appearances on "The Crazy Ones" and "The New Adventures of Old Christine". 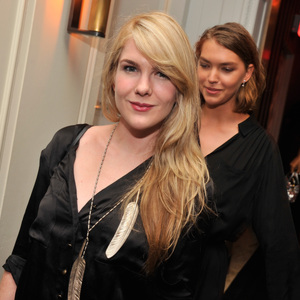