What is Lili Reinhart's Net Worth and Salary?

Lili Reinhart is an American actress and author who has a net worth of $6 million. Reinhart is best known for starring as Betty Cooper on The CW series "Riverdale," which began airing in 2017. She is also a social media star with more than 32 million followers across her various channels. Lili has more than 20 acting credits to her name, including the TV series "Surviving Jack" (2014) and the films "Hustlers" (2019) and "Chemical Hearts" (2020). She also served as a producer on "Chemical Hearts," and in March 2021, it was announced that she would be producing and starring in the Netflix film "Plus/Minus."

Reinhart published the book "Swimming Lessons: Poems" in 2020, and it was a "New York Times" Paperback Trade Fiction Best Seller. In October 2019, she was named an ambassador and spokesperson for CoverGirl because "she embodies a woman who is unapologetically herself — she is authentic, talented, and truly lives by what she believes in."

Lili Reinhart was born Lili Pauline Reinhart on September 13, 1996, in Cleveland, Ohio. She grew up in nearby Bay Village with mother Amy, father Daniel, and sisters Chloe and Tess. Lili became interested in acting, singing, and dancing when she was 10 years old, and in middle school, she played on basketball and soccer teams that were coached by her father. Reinhart attended Bay Village High School, graduating in 2014, and she moved to Los Angeles to pursue an acting career at age 18.

In 2016, Reinhart landed the role that would change her life: Betty Cooper on "Riverdale." Featuring the characters of Archie Comics, "Riverdale" is described as "a bold, subversive take on Archie, Betty, Veronica and their friends, exploring the surreality of small-town life." Lili's Betty Cooper is a cheerleader, a writer for the school newspaper, and quite the detective. Reinhart has shown off her singing abilities in several episodes of the series, including the musical episodes "Chapter Thirty-One: A Night to Remember," "Chapter Fifty-One: Big Fun," and "Chapter Seventy-Four: Wicked Little Town." Lili appeared in the film "Galveston" in 2018, and in 2019, she co-starred with Jennifer Lopez, Constance Wu, Keke Palmer, and Julia Stiles in "Hustlers," which grossed $157.6 million against a $20.7 million budget. In 2020, Reinhart lent her voice to "The Simpsons" episode "The Hateful Eight-Year-Olds" and starred in the Amazon Studios film "Chemical Hearts," which was based on a 2016 novel by Krystal Sutherland. RogerEbert.com critic Sheila O'Malley praised Lili's performance, stating "Lili Reinhart is a revelation. She has such gravitas as an actress, and it's real gravitas, a weightiness and solemnity that comes from harsh experience. It's all over her face…It's a challenging role, and Reinhart doesn't miss a beat." 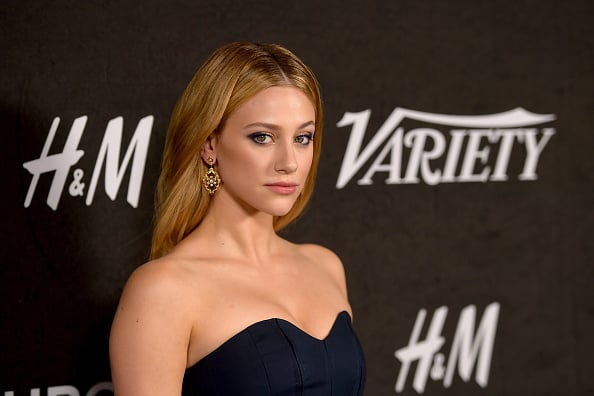 Lili, who is bisexual, was in a relationship with her "Riverdale" co-star Cole Sprouse from 2017 to 2020. She is a Christian who says a prayer at bedtime and likes meditating, and in a 2020 interview, she revealed that she was training to become a reiki healer. Reinhart has been open about her struggles with body dysmorphia, depression, and anxiety, and in 2019, she wrote on Instagram, "Friendly reminder for anyone who needs to hear it: Therapy is never something to feel ashamed of. Everyone can benefit from seeing a therapist…I have anxiety and depression. And today I started therapy again." In October 2019, she became an ambassador for American Express to promote the launch of the Green from Amex card, which the company makes with recycled ocean plastic.

Reinhart has been nominated for seven Teen Choice Awards for "Riverdale," and she won every time, taking home the prize for Choice Breakout TV Star in 2017, Choice TV Ship (shared with Cole Sprouse) in 2017, 2018, and 2019, Choice: Liplock (shared with Sprouse) in 2018, and Choice TV Actress: Drama in 2018 and 2019. "Riverdale" has also earned her nominations from the Academy of Science Fiction, Fantasy & Horror Films (Best Performance by a Younger Actor in a Television Series, 2018), Critics Choice Super Awards (Best Actress in a Superhero Series, 2021), and People's Choice Awards (Favorite Drama TV Star in 2019 and Favorite Female TV Star in 2019 and 2020). Lili earned a Breakthrough Performance Award for "The First Hope" at the 2013 New York VisionFest, and she received a Shorty Award nomination for Storyteller of the Year in 2019.

In August 2020, Reinhart paid $2.715 million for a 4,170 square foot home in the San Fernando Valley area of Los Angeles. The home was remodeled in 2017 and includes five bedrooms, five bathrooms, a wine room, and a swimming pool.