Leven Rambin Net Worth: Leven Rambin is an American actress who has a net worth of $1 million. Leven Rambin was born in Houston, Texas in May 1990. She acted in school plays and studied at the Houston School of Film and Theatre. Rambin moved to New York to pursue her acting career.

At 13 years old Rambin made her acting debut on the soap opera All My Children from 2004 to 2010. She starred as Caroline Paxton in the TV series The Book of Daniel in 2006. Rambin made her feature film debut starring as Missy Thaxton in the movie Gigantic in 2008. She starred as Riley Dawson in the TV series Terminator: The Sarah Connor Chronicles from 2008 to 2009. From 2009 to 2010 Rambin starred as Sloan Riley in the TV series Grey's Anatomy. She starred as Heather West in the series Scoundrels in 2010. In 2011 she had recurring roles on the TV series CSI: Miami and Wizards of Waverly Place. Rambin has also starred as Glimmer in the 2012 movie The Hunger Games and as Clarisse La Rue in the 2013 film Percy Jackson: Sea of Monsters. She also starred in the Green Day music video "Stray Heart" in 2012. Leven has been nominated for two Daytime Emmy Awards and a Soap Opera Digest Award. 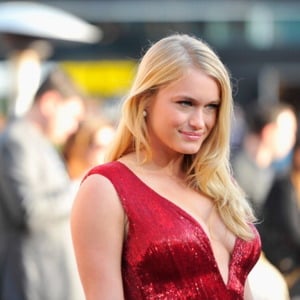