Lennie James net worth: Lennie James is an English actor, screenwriter, and playwright who has a net worth of $4 million. Lennie James was born in Nottingham, Nottinghamshire, England in October 1965. He graduated from the Guildhall School of Music and Drama and was at one time employed by the British government's social security office. As an actor he first appeared in an episode of the television series Screenplay in 1988. From 1995 to 1996 James starred as D.C. Bruce Hannaford in the TV series Out of the Blue. In 2003 he starred as Lee Kingley in the series Buried. One of his best known roles came starring as Robert Hawkins in the television series Jericho from 2006 to 2008. James starred as Charlie in the series Hung from 2010 to 2011. In 2013 he starred as Joe Geddes in the TV series Low Winter Sun. In 2015 he starred as Glen Boyle in the series Critical. James has had recurring roles in the TV series The Orchid House, Civvies, Cold Feet, The State Within, The Prisoner, Human Target, Line of Duty, and The Walking Dead. He has also starred in the movies Lost in Space, Les Miserables, Among Giants, Snatch, Lucky Break, The Martins, 24 Hour Party People, Sahara, Outlaw, The Next Three Days, Colombiana, Lockout, and Get on Up. In 2001 he was nominated for a BAFTA TV Award for Storm Damage. 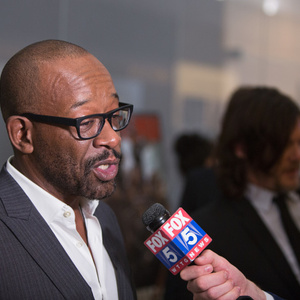