How much is Leelee Sobieski Worth?

Leelee Sobieski net worth: Leelee Sobieski is an American film and television actress who has a net worth of $6 million. Leelee Sobieski was born Liliane Rudabet Gloria Elsveta Sobieski in New York City in 1983 and studied literature and fine art at Brown University.. After being spotted by an agent in her school cafeteria, Leelee Sobieski was picked as one of the "rising young starlets" of the 90s, and achieved recognition in her mid-teens for her performance in the 1998 film "Deep Impact" and as the daughter of a costume store owner in "Eyes Wide Shut". She received various nominations for her film and television work in such projects as "Joan of Arc for which she garnered an Emmy nomination and "Uprising" for which she received a Golden Globe nomination. She has appeared in a number of films and television shows including "Never Been Kissed", "Uprising", "Joy Ride", "The Glass House", "Hercules", "Lying", "Wicker Man", "Walk All Over Me", "88 Minutes", "Acts of Violence", "In a Dark Place", "Public Enemies", "Drop Dead Diva", "My First Mister", "Jungle to Jungle" and "The Good Wife", among other projects. She is married to designer Adam Kimmel. The couple has one child. 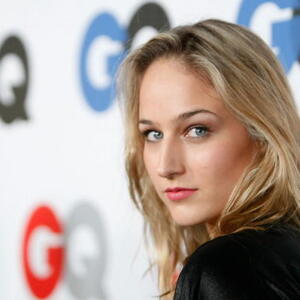