Lee Ritenour Net Worth: Lee Ritenour is an American jazz guitarist, session player and composer who has a net worth of $14 million. Lee Ritenour was born January 11, 1952 in Los Angeles, California. Ritenour has contributed to over 3000 sessions and has charted over 30 contemporary jazz hits since 1976. Known to fans as "Captain Fingers" for his uncommon dexterity on the guitar, Lee Ritenour is a noted jazz artist and session musician who has been one of the leaders in his field since the early '70s. Ritenour took up the guitar when he was just 8 years old and had made the decision to make music his career by the time he was 12. Ritenour's parents were supportive of his ambitions and even arranged for him to study with some of the best guitar teachers in Southern California. At 15, Ritenour joined a rock band called the Esquires, and when singer/musician John Phillips heard Ritenour play, he invited Ritenour to perform on an upcoming session for the '60s group The Mamas and the Papas; it was the first recording for the 16-year-old guitarist. In 1976, Ritenour stepped into the spotlight with his first solo album, First Course, a polished jazz-pop effort released by Epic Records. Throughout his career, Ritenour has experimented with different styles of music. A true fusionist, he often incorporated elements of funk, pop, rock, blues, Brazilian and even a classical form of music infused with jazz. In the early '80s Ritenour was given his own Ibanez signature model guitar, the LR-10, which was only produced between 1981 to 1987. The use of the LR-10 can be heard exclusively on his album Rit. Ritenour now (mostly) plays the Gibsons he first played in the '70s (the ES-335 and L5), as well as his signature Lee Ritenour Model archtop guitar made by Gibson. Ritenour joined the 10th and 11th annual Independent Music Awards judging panel to boost independent musicians' careers. He was also a judge for the 8th and 9th Independent Music Awards. In June 2010, in celebration of his fifty years as a guitarist, Lee Ritenour released the album 6 String Theory (in reference to 6 musical areas covered by the use of guitar). The album featured famous guitarists Steve Lukather, Neal Schon, John Scofield, Slash, Pat Martino, Mike Stern, George Benson and B.B. King as well as younger players such as Andy McKee, Joe Robinson and Guthrie Govan. 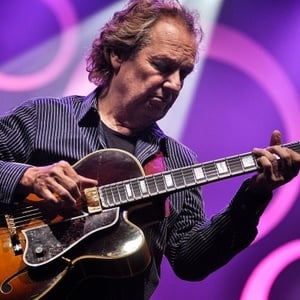