Lea Seydoux net worth: Lea Seydoux is a French actress who has a net worth of $5 million. Lea Seydoux was born in Paris, France in July 1985. She started out in French cinema and starred in movie such as The Last Mistress and On War. Seydoux gained attention and was nominated for a Cesar Award for starring in the 2008 film The Beautiful Person for which she won the Trophee Chopard. She has gone on to star in Hollywood films such as Inglourious Basterds in 2009, Robin Hood in 2010, Midnight in Paris in 2011, and Mission: Impossible – Ghost Protocol in 2011. Seydoux was nominated for a second Cesar Award for Most Promising Actress for her role in Belle Epine in 2010 and a for a Cesar Award for Best Actress for the movie Farewell, My Queen in 2012. In 2013 she won the Palme d'Or at the Cannes Film Festival for her role in the film Blue is the Warmest Colour. She also won the Lumieres Award for Best Actress for the movie Grand Central. Seydoux was nominated for the BAFTA Rising Star Award and starred in the films Beauty and the Beast, The Grand Budapest Hotel, and Saint Laurent in 2014. She starred as Madeleine Swann in the 2015 James Bond film Spectre. 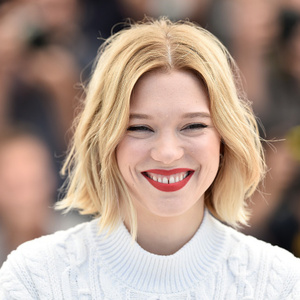