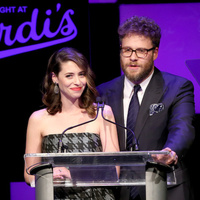 Lauren Miller Net Worth: Lauren Miller is an American actress who has a net worth of $2 million. Lauren Miller was born in Lakeland, Florida in October 1982. Miller is married to actor Seth Rogen. She graduated from the film school at Florida State University. She started off working with short films as a producer, editor, director, writer, and costume designer. Miller made her film acting debut in the 2007 movie Superbad as Scarlett Brighton. She appeared in the movies Zack and Miri Make a Porno and Observe and Report. She appeared in and wrote the 2011 film Girls! Girls! Girls!. Miller starred as Bodie in the 2011 movie 50/50. She produced, wrote, and starred in the 2012 movie For a Good Time, Call… She also starred in the 2014 movies Someone Marry Barry and Growing Up and Other Lies. She also had a recurring role on the TV series Ben and Kate in 2012. She is scheduled to star in the upcoming release Stereotypically You. Lauren started dating Seth Rogen in 2004 and the couple married in 2011.