Laura Benanti Net Worth: Laura Benanti is an American actress who has a net worth of $1 million. Laura Benanti was born in New York City, New York in July 1979. She appeared in many high school and community productions which included Evita, Follies, and Into the Woods. She won a Paper Mill Playhouse Rising Star Award for Outstanding Actress in a high school production for her title role in Hello, Dolly!

at 16 years old. She starred in The Sound of Music on Broadway and then received a Tony nomination for Best Performance by a Featured Actress in a Musical for Swing!. She received another Tony nomination for the Broadway revival of Into the Woods in 2002. She starred in Nine and The Wedding Singer on Broadway. She then performed in Gypsy and won a Tony Award. Her television debut came in the series Starved in which she starred as Billie Frasier in 2005. In 2006 Benanti made her film debut in the movie Take the Lead. She starred in the series Eli Stone in 2008 and The Playboy Club in 2011. From 2012 to 2013 she starred as Lauren Schneider in the TV series Go On. She starred as Shelby Shackleford in the series Royal Pains in 2013 and as Mia in the series Nurse Jackie in 2014. Since 2011 she has played the recurring role of Maria Grazie in the series Law & Order: Special Victims Unit. In 2013 she starred in the NBC television production The Sound of Music Live!. Laura was previously married to actor Steven Pasquale and Spin Doctors lead singer Chris Barron. 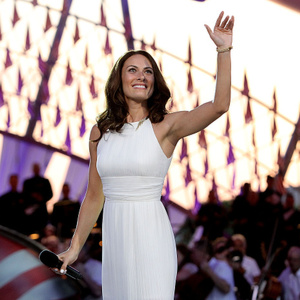