Some of her projects include "A Man Called Hawk", "Fried Green Tomatoes", "Juice", "Law & Order", "Malcolm X", "Lorenzo's Oil", "Cheers", "Sleepless in Seattle", "When a Man Loves a Woman", "Party of Five", "Earth 2", "Homicide: Life on the Street", "Ally McBeal", "Introducing Dorothy Dandridge", "Judging Amy", "Once and Again", "100 Centre St", "Freedomland", "All About Us", "Harry's Law", and "The Watson's Go to Birmingham". She has also appeared in two Broadway productions. She was nominated for a Tony Award for Best Actress for her performance in the 2014 revival of "A Raisin in the Sun". LaTanya Richardson has been married to fellow actor Samuel L. Jackson since 1980. 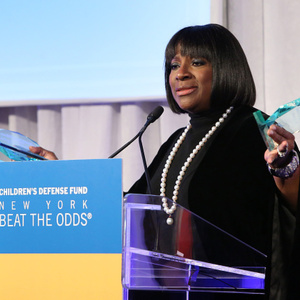