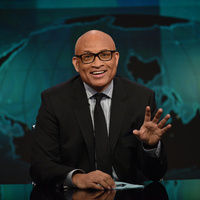 Larry Wilmore Net Worth: Larry Wilmore is an American writer, actor, and television producer who has a net worth of $3 million. Larry Wilmore was born in Los Angeles, California in October 1961. Larry's younger brother March is an actor, writer, and producer as well. As an actor Larry Wilmore first appeared in the film Good-bye Cruel World and the TV series The Facts of Life in 1983. He also appeared in episodes of the television series Sledge Hammer!, In Living Color, Sister, Sister, The PJs, Help Me Help You, The Office, How I Met Your Mother, Accidentally on Purpose, Traffic Light, Love Bites, Happy Endings, Bullet in the Face, Malibu Country, On Story, NTSF:SD:SUV, Instant Mom, and Playing House. Wilmore has also starred in the movies Dinner for Schmucks, Vamps, and Date and Switch. He has written or produced for the TV series Into the Night, In Living Color, Sister, Sister, The Fresh Prince of Bel-Air, The Show, The Jamie Foxx Show, Teen Angel, Whoopi, The Office, The Bernie Mac Show, The PJs, and Love Bites. Wilmore won a Primetime Emmy Award in 2002 for Outstanding Writing for a Comedy Series for The Bernie Mac Show. He began hosting the Comedy Central series The Nightly Show with Larry Wilmore in January 2015, replacing Stephen Colbert. The Nightly Show was canceled in August 2016.