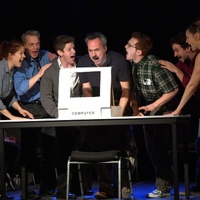 Larisa Oleynik Net Worth: Larisa Oleynik is an American actress who has a net worth of $4 million. Larisa Oleynik was born June 7, 1981 in Santa Clara County, California. Her big break came when she was only eight years old and landed the part of young Cosette in a production of Les Miserables. Her costar, Rider Strong, played Gavroche. The two would be reunited when Larisa guest-starred on Rider's sitcom, Boy Meets World (1993). Oleynik's most well-known roles are Bianca in 10 Things I Hate About You (1999) and Alex in The Secret World of Alex Mack (1994). Despite her success in The Secret World of Alex Mack, Oleynik made the decision to attend college and enrolled in Pinewood School and later in the Sarah Lawrence College, describing the latter as "the best decision I've made" and graduated in 2004. She then moved to Los Angeles and between 1999 and 2002, Oleynik is said to have dated her 10 Things I Hate About You and 3rd Rock from the Sun costar Joseph Gordon-Levitt. In January 2013, she was granted a restraining order against a fan she claims was so obsessed that he changed his last name to hers. The obsessed fan reportedly left gifts for her at her mother's apartment. During 2000, she also appeared in two independent films: 100 Girls and A Time for Dancing. She has appeared in Malcolm in the Middle and had a supporting role in the film An American Rhapsody and Bringing Rain, a low-budget film. In March 2008, Oleynik guest-starred in episode 13 of Aliens in America and in 2009 she provided audio commentary for the 10 Things I Hate About You 10th Anniversary Edition Blu-ray. In March 2011, Oleynik began a recurring role on Hawaii Five-0 as CIA analyst Jenna Kaye; her character was later killed off. Oleynik appeared as the girlfriend (and later wife) of Ken Cosgrove, Cynthia Cosgrove (née Baxter), in the fourth-season episode Chinese Wall and the fifth season premiere A Little Kiss on the AMC television show Mad Men.